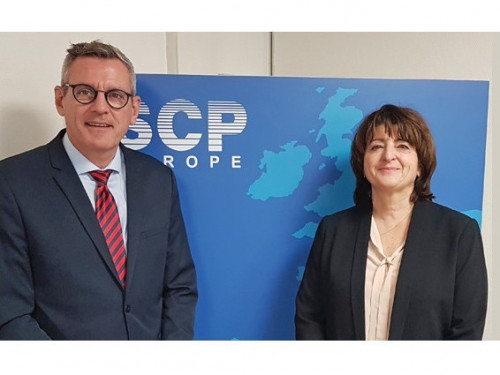 Here’s an exclusive interview with these two iconic figureheads of SCP.

Historical and moving handover of power between Sylvia Monfort, SCP European General Manager for 20 years, and Jean-Louis Albouy, whose own career within the company since 1999 should not be overlooked!

How will this transition take place?

SM and JLA - Smoothly, over the first quarter of 2021, and in continuity. We have been working together for many years now. Sylvia at the European Headquarters. Jean-Louis Albouy, Managing Director at SCP France and sales coordination since 2010, is already involved in the management of SCP export subsidiaries.

The objective is to capitalise on what has always made SCP Europe a success: to maintain the "pure player" approach by pursuing the 100% B to B distributor model in a European market that sometimes lacks clarity in its positioning!

The way we operate will continue, particularly with the continuation of our purchasing policy, our strong partnerships with the major Manufacturers and Leading Brands, as well as the professionalism of the same teams that have been working within the company for many years. It is perfectly constructed, clear and has proven its worth, since all the stages of our development have been successful, including in complicated markets, which are reluctant to operate via B to B Distribution, and in atypical situations, notably with the latest COVID crisis.

It can be said that the road travelled has indeed proved your strategy right?

SM and JLA - Indeed, it's enough to quote a figure: whereas in 1998 our turnover was €1.8 million, notably thanks to the purchase of Norcal in the UK, we're going to finish today at €184M with a growth of nearly €35 million in the year 2020 alone.

As for adapting to crisis management, we need only mention the preparation in the face of the significant increase in demand in recent months. Forecasting the necessary stock, adequate cash flow, immediate adaptation and maximum reactivity of our teams (even during difficult times!) have made all the difference in a market that has been largely destabilised in 2020.

Our visibility in Europe has enabled us to anticipate and provide responses best suited to the exceptional circumstances linked to the COVID crisis.

These examples are proof, if any, of the relevance of our policy and the solidity of the foundations built over the last 20 years. It is therefore obvious that the management under Jean-Louis will follow in the footsteps of Sylvia's.

Today, we also remain on the lookout for any buy-out opportunities that may arise in Europe in order to offer an even more extensive range of products and services adapted to the needs of this rapidly expanding market.

Each has their own personal "touch"!

SM and JLA - Jean-Louis undoubtedly has a solid experience and in-depth knowledge of all the contacts in the professional sector and of the equipment in our offer. Taking over from Sylvia, it is a second part of the development of SCP Europe that will see the light of day. On a consolidated basis, Jean-Louis will continue with the same dynamic, validating internal and external growth, while completing the next stages of construction.

Of course, the development and implementation of a new global ERP platform and high-performance digitisation tools, which mobilise more than 100 people from the POOLCORP Group, will intensify in France and then in Europe after the start of operations in the United States this quarter.

The opening of new branches and acquisitions remain on the agenda, as well as the increase in storage capacity (a tripling of surface areas is planned).

However, a new impetus will be given through major investments planned over the next 3 years with the aim of increasing productivity and speed in order to move up a gear.

This objective is based on the company's strong values which are :

Has this transfer of power led to a reorganisation?

Yes, even if the succession plan has been planned for more than a year.

To succeed Jean-Louis Albouy, Daniel Bos will take over the position of Managing Director for SCP France.  Daniel Bos joined the group in 2000, within the regional branch of SCP Rodez, of which he became Director in 2001. This step enabled him to familiarise himself with the swimming pool market and to develop with customers and in the field the notions of service and proximity, which underpin the company's DNA. In 2006, he joined SCP France's head office as Operations Director and then Director France in 2010 and continued his work by strengthening the link between our teams around a charter of values and cohesion in the service of the group's strategy, with a constant concern for the quality of customer service.

This appointment is accompanied by the creation of an SCP France Management Committee which will be composed of Mr. Guillaume Vaganay, Director of Operations and Mr. Carlos Garrido, Director of Sales and Marketing, who have greatly contributed to the development and successful deployment of SCP in France over the last 20 years.

We have also strengthened our teams at SCP EU HQ, in the IT, Data and HR teams to be able to meet the many challenges that lie ahead in terms of efficiency and productivity.

In conclusion, the torch is passing from hand to hand, but SCP's influence will remain based on the same strong values with a reasoned attitude.

SCP's ambition in France, Europe and the world will continue to be to anticipate and participate in the evolution of the market and to help our professional customers develop by faithfully meeting their demands and expectations.