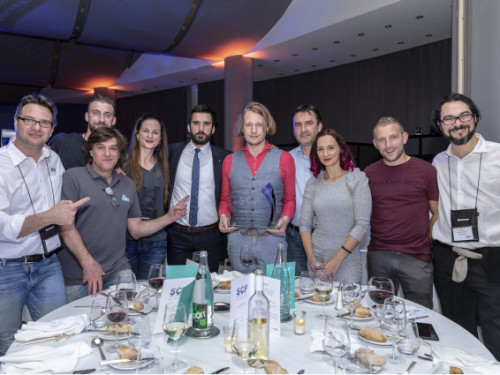 Two years ago, we discovered at SCP Europe's latest Showcase in Rovinj, Croatia, the dynamic Croatian team of the SCP Group. SCP Adriatica is led by its Lado Lacen, Director of the new entity attached to the SCP Group as a distributor to Eastern Europe. Two years later, SCP Adriatica is composed today of 9 employees. It is located in Istria, the peninsula located in north western Croatia on the border with Slovenia.

SCP Adriatica was honored, during the 5th International Sales Conferences & Vendors Showcase of SCP Europe held in Monaco in November 2019, with the award given to one of their customers, BK MONT company, for the achieving of an aquatic complex, AQUACOLORS water park. This very important project was carried out thanks to the well-conceived preliminary design of the company ARHETIP 21 Porec. This achievement reflects the dynamism of the Croatian builder supported by its distribution partner SCP Adriatica.

Lado Lacen introduced us Filip Brajkovic this Croatian pool builder who has just received this trophy from Sylvia Monfort, General Manager of SCP Europe. The Croatian company is located in Pazin, continental part of Istria.

Filip Brajkovic tell us about your achievement that has just been awarded in Monaco? How was the construction done?

F.B: We received an award from SCP Europe for the Best commercial pool project, for our construction of the AQUACOLORS water park in Porec, Croatia. It is a great honor to receive this award from SCP Europe, the world's largest distributor. On this occasion, I would like to thank the ARHETIP 21 architectural company in particular for a well-thought out and creative design project that was the foundation and springboard for this wonderful project.
This is the latest water attraction within the existing AQUACOLORS water park, whose construction and realization took 10 months and involved a total of 70 people.

Tell us about your company. What achievements do you usually make?

F.B: My father, Ivan Brajkovic created our company which is now specialized in the construction of swimming pools. We have been building swimming pools for several years in partnership with SCP Adriatica, but we are involved in the installation of swimming pools for over 20 years.
Today we have 24 employees of which 10 are engineers and every year, we build between 70 and 80 pools.
We work on big projects in hotel chains such as Valamar, Plava Laguna, Maistra, Liburnia and in different water parks, like Aquacolors, Istralandia and others.

How was the 2019 season for your company?

F.B: It was a great season and I really and honestly want to say that this was the best career year. We had a lot of work and we are grateful to the collaboration and support of our distributor SCP Adriatica.

Lado Lacen after 2 seasons at SCP Adriatica, what has changed for you?

L.L: Nothing special has changed, because we agreed, several years before the acquisition of SCP Adriatica, together with Mrs. Sylvia Monfort and her team, to prepare our entire team to work in the system and rules of the SCP Group. Of course, it is much more serious and demanding work in a large global company like SCP.

L.L: It was a great season. We are pleased with the results of 2019. I can say that our company has recorded a satisfactory growth every year.

Remind us where is located SCP Adriatica?

L.L: SCP Adriatica is located in Istria at the epicentre of the most important events for the activity of the swimming pool industry.
We are located in the immediate vicinity of the largest Croatian investors, large hotel companies such as VALAMAR, PLAVA LAGUNA, MAISTRA, ARENATURIST and LIBURNIA, who own many hotels, campsites and other tourist sites along the entire Croatian coast.

How is the market developing in Croatia?

What are the growing markets around Croatia? How do you intend to develop them?

L.L: Apart from Croatia, we are particularly interested in the markets of Slovenia, Bosnia and Herzegovina, Serbia and Montenegro. In the coming years, we want to work more intensively in the markets cited above.